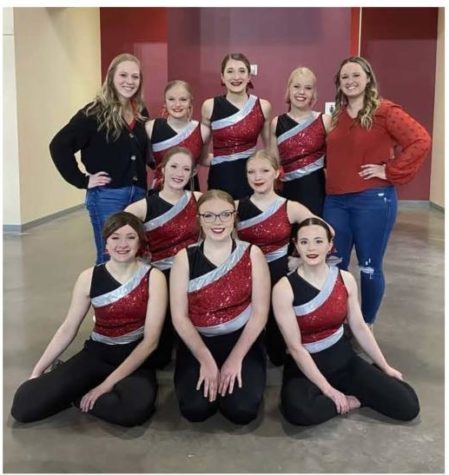 They’ve been working hard and preparing all year long for this one moment, for this one performance, the two minutes and thirty  seconds. Coming in for the summer to learn the dance, choreographed and taught by Marlando Sparks Junior, for seven hours and running through it multiple times.

Friday, February 18th, the dance team left for Grand Island for State Cheer and Dance. The ride to the hotel was quiet and long. But once they got to the hotel, the girls got excited to be able to play games and bond with each other. They went into their rooms and threw their things across their room. Bags and snacks everywhere. They took time to semi-clean up and then gathered in one room, where they hopped onto the beds and bonded together for the night playing games for hours.

“It was fun playing games in each other’s hotel rooms the night before state,” sophomore Chloe Zegers stated was her favorite thing about the night before. The team had many laughs from the games they played to the stories they told each other. The girls spent hours playing “Hashtag it,” “IncoHEARent,” and “Cards Against Humanity.” The coaches even had to call the team to make sure they got to bed and were well rested for the next morning because the girls were laughing loud late into the night.

Saturday, February 19th. The next morning the team got up and started getting ready for the day. “I loved getting ready. It was that calm moment before the storm. We had a really chill morning for the crazy day ahead of us. And of course, bonded some more,” said senior Breanna Slonecker. Lili Eickmeier had her phone playing music in a drawer to make it louder because they forgot a charger to their speaker. They started doing their makeup while jamming to the music and talking about how nervous they were for their upcoming performance. About half an hour before leave time, they gathered in one room so Breanna Slonecker could do their makeup and the team made sure everyone looked good for the day. They left for the competition at 9:15 am, excited but pretty nervous.

Upon arriving at the competition they had some time to watch other dance teams perform. They critiqued these dances and made sure they had those critiques in mind when they performed. “We are going to take this time as a learning experience. Pay attention to these dancers. Take notes,” head coach Morgan Dredge told the girls as they watched a team perform a hip hop routine.

When it was finally time to get ready to perform, the dance team went to start stretching. While they were stretching they talked about strategy and whether they were excited or nervous for the performance. After their time for stretching was over, they went to take a professional team photo. Then they had time to go over the dance one more time before they were on that gym floor in front of the judges and everyone in the audience.

Once they were backstage, the team started getting nervous. The girls talked to the other team backstage and cheered on the ones performing. They had three teams before them, including the one already performing.  “The nerves started kicking in when we were the next team to perform. To calm my nerves, I took many deep breaths,” senior Emily Johnson admitted. The time seemed to slow and last forever between the team just before them and their time to shine. They went out onto the gym floor and gave it their all and felt confident in themselves after their performance.

Waiting, waiting, and even more waiting the dancers had done between the last team and the awards. The team was getting anxious to hear how they did in the competition. The results took a total of 45 minutes to tally up. The girls kept asking each other what was taking so long for the result to come in. Every person they saw on the gym floor, they thought was the announcer ready to tell them the results. As the time went on the team got more and more anxious and more hungry. And then the time finally came and they all looked at each other nervously. The Announcer only announced the top 4 in all categories. The team was a little disappointed they were not announced.

Once all the results were out they went out to eat as a team and as they were waiting for their food they discussed their results. All the comments from the judges and even the total points. They were not far behind the team ahead of them in team points. Class C1 High Kick David City Platinum Dance team came in 6th place with a total 68.13 points. Congratulations to Emily Johnson, Lili Eickmeier, Breanna Slonecker, Chloe Zegers, Kaitlyn Palik, Hailey Glodowski, Kaydance Smith, Kailey Blum, Head Coach Morgan Dredge, and Assistant Coach Brandy Barlean.